Over 100 people attended a special remembrance service in the Lady Chapel of Liverpool’s Anglican Cathedral (Sat 31 August) to honour those who have been bereaved or injured through road crashes.

The service, organised by the North West branch of RoadPeace, the national charity for road crash victims, took place on the 22nd anniversary of the death of Diana, Princess of Wales.

Labour Councillor Anna Rothery, Lord Mayor Elect and Liverpool’s first black lord mayor, lost her father in a road crash and spoke movingly during the service. She pledged her support and help to RoadPeace to reduce the number of road crashes in the region. Shadow chief secretary to the Treasury and Labour MP for Bootle, Peter Dowd, also attended the service. Representatives of the emergency and support services were also in attendance.

The congregation heard from Merseyside Police Chief Inspector Andy Rankine and RoadPeace campaign and press manager Victoria Lebrec, who lost her leg after she was run over by a lorry when cycling to work in 2014.

Lesley Williams read two poems she had written to mark the 19th anniversary of her daughter, Dominique’s death 10 years ago this week en route to Creamfields.

Those attending placed white roses and photographs in the Lady Chapel of the cathedral to remember loved ones during the event. At the end of the service the congregation heard from the Reverend Barry Parker who held the first ever remembrance service in Liverpool for road crash victims 23 years ago.

After the service, five doves were released outside the cathedral, representing the five people killed on Britain’s roads every day. Petra Kendall-Raynor released a dove in memory of her father Thomas Kendall who was killed when crossing the road as a pedestrian. She said, “Road Safety is too often overlooked in society. Thought provoking services like this one not only help us remember loved ones but encourage us to do more to prevent any more needless injury and loss of life on our roads. 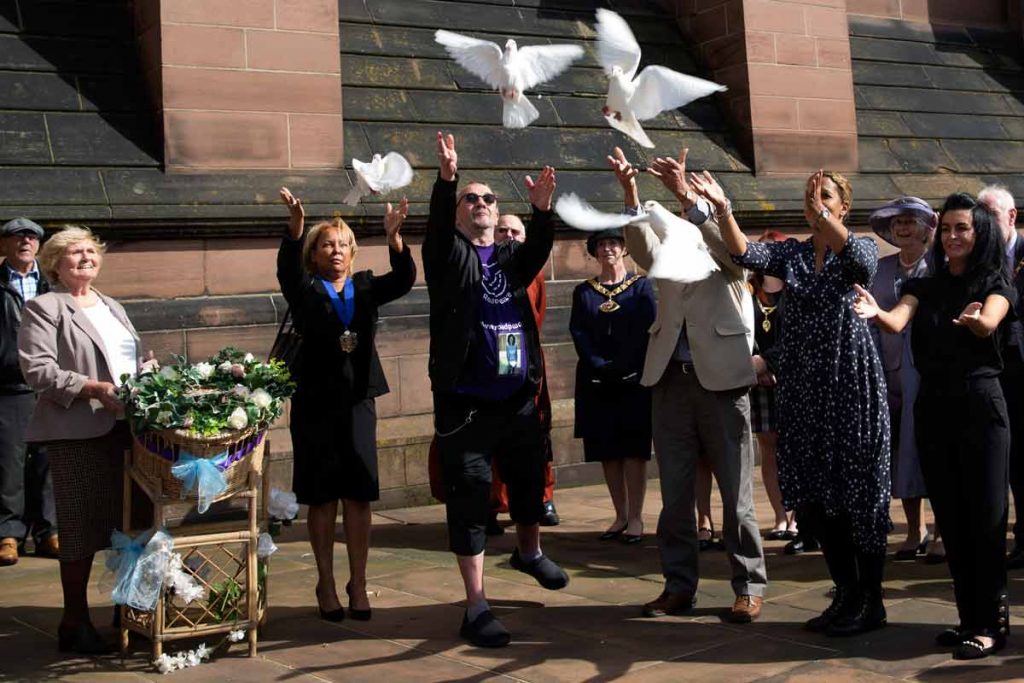 RoadPeace trustee and event organiser Pauline Fielding said: “I would like to thank everybody who made today’s service possible. Those who are bereaved or injured through a road crash are all different but we have one thing in common, our lives have been changed forever, but we can and do support each other.”

A family who travelled from London to attend the service said, “This is the first time that we felt we were not alone in our situation and it was good to meet others who actually understood what we are going through”. Another said, “Thank you so much for welcoming us into this supportive community. It really meant a lot and helped us so much in what is still a difficult time for us. The support was just amazing!”